A Pile of Bright and Shining Lies

Fifty years ago I was a member of Students For a Democratic Society.

In October of 1967 I left home. I was planning on leaving, but I was also planning on attending the October 21st anti-war rally in Washington DC and joining the march on the Pentagon.

You know the iconic picture of the young man sticking flowers in the barrels of the soldier’s rifles. 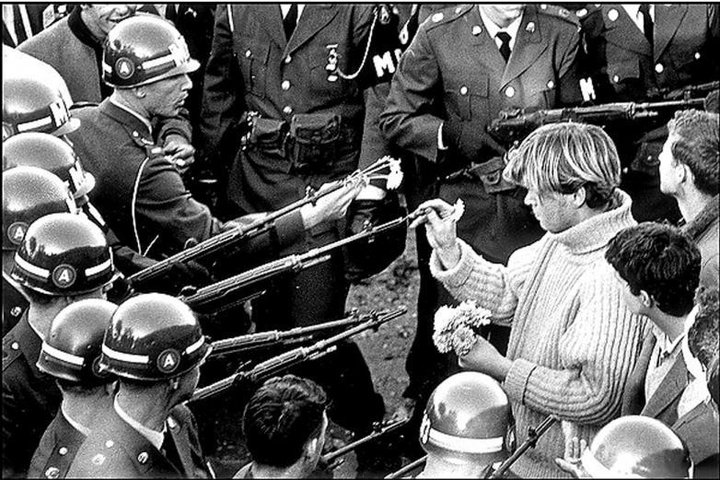 I was there.  I was part of a group of several thousand that gathered on the steps of the Pentagon that autumn night.

We smoked weed, drank wine, ate sandwiches and talked with other anti-war people from across the country.  We heard how Berkeley students and folks in the Bay Area had actually fought with the police during the demonstrations to shut down the Oakland Draft Center.

We had spent time the week before practicing non-violence and how to react when they came to arrest us for siting in.  Our response was to be the same as the draft resistors, “Hell No! We won’t go!”  Some burned their draft cards that cold night.  We talked about moving from protest to resistance.

At some point during the long cold night those making the arrests finally got to me, and asked if I would move voluntarily. I answered, “Hell no. I’ve been sitting here all night waiting to be arrested.”  They roughly dragged me to a bus and sent a bunch of us to a big building in Occoquan.  Dr. Spock was there and so was Norman Mailer and a lot of other people I knew only from stories in newspapers.

Afterwards I made my way west to the Haight Ashbury and wound up in a cadre called HADU which variously stood for Haight Anti-Draft Union and Haight Ashbury Defense Unit.

We encouraged desertion and had lots of men take us up on it.  That’s something that was left out of Ken Burns “History”.  Hippies and draftees, guys returning from Nam were all the same age.  We all listened to the same music, smoked the same dope, dropped the same acid.  And most hated the war.  If you were working class or a person of color you were draftable.  You didn’t get out on a technicality the way the rich Frat Boys did.

Being an anti-war hippie meant that it was your friends and high school classmates who were being drafted and who were coming home in body bags.  So when someone in a uniform showed up at Hippie Hill we got them stoned, asked them if they wanted to have dinner with us.  Hippie women would sleep with them.

A couple of years later after I had moved to Berkeley I joined the ranks of women with a deserter boyfriend, a guy named Jerry, a Marine who had done his tour of duty plus as there weren’t enough replacements.  Unlike other friends who had deserted he didn’t go to Canada.

Instead he was part of those who stayed and resisted.

When he was arrested I got him out.  Moved, hid him out.

All along we knew there was not one thing in Vietnam worth the life of one American soldier.

The South Vietnamese government was rotten to the core.  We knew that when the Buddhists monks burned themselves alive back in 1963, before JFK was killed.

Our government told us lie upon lie after lie.  News Paper, TV too told us all these bright and shining lies until Tet in 1968…  Then the cracks started to appear.

But we were young and dumb and couldn’t see how bad Nixon was and how he was the Donald Trump of his time full of lies and hypocrisy.

Yes I have watched part of the Ken Burns documentary.  The list of those who put up the money tells whose point of view you are getting.

There are a pile of books I could tell you to read.  Apocalypse Now! gets the absurdity of it all.

There is a wall in Washington that has nearly 60 thousand names of my contemporaries on it.

We didn’t trust capitalism, were so eager for a war to stop Communism.  The men, and in those days they were virtually all men who made the decisions weren’t about to listen to an old wispy bearded Asian man (hell we called them “gooks” ) who used documents from our own revolution.

Now 50 years later we build factories there and import cheap clothing and shrimp/seafood from there.

As an old hippie woman I can’t help but think we could have gotten to the same place without all the death and destruction.

Nearly 60 thousand dead Americans and no one knows how many Asian people died for what was a bunch of bright and shining lies.

2 Responses to “A Pile of Bright and Shining Lies”

« 10 Things About Patriotism
The Roots of Trump’s Prejudice | The Resistance with Keith Olbermann »
%d bloggers like this: