Draft Alan Grayson to run against Obama in the Primaries

I was never swept up in the Obamaphilia mania that inundated the Democratic Party during the 2008.  I supported him because he was the Party’s candidate.  I saw through his advertising slogan platitudes, “Hope.. You’ll drink Coke instead of Pepsi. or Change you can believe in buy the new improved sweatshop manufactured Nike.  Just Do It!”

As anyone who regularly reads this blog knows, I’m an old fashioned existentialist.  I don’t give a shit about your “identity” it is what you do that is important.

I watched Obama squander an overwhelming majority in the House and Senate by offering concessions before he was asked to, by refusing to stand up for what he believes in.  Or maybe he actually stand for nothing because he has no core belief as befits a post-modern president in a world ruled by corporations, big money and spectacle.  A world where image and identity, interpretation have more reality than the physical reality of the lives of working people.  After all that is what post-modernism is all about with its twisting of words until they have no meaning whatsoever.

There was a slip during the Bush II reign that gave a “wizard of Oz” like glimpse at the machinations behind the curtain, when a Bush official said, “We don’t deal in the fact based world, we make our own reality.”

As time has gone on Obama has come more and more to resemble Bush II, darker complected and better read, far more articulate to be sure, but, his continuation of Bush.

We need a real Democrat, a real progressive who isn’t afraid to tell the truth about how the hard working and people who are unemployed due to the lack of jobs and discrimination  are getting screw for the benefit of the rich.

We need Alan Grayson back in office is some capacity or other.  Those willing to stand up in the face of right wing lies and speak the truth are rare indeed. 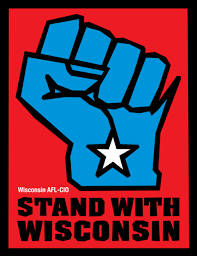 On May 4, 1886, in Haymarket Square in Chicago, the public rallied peacefully in support of 40,000 workers in Chicago who had gone on strike, to win the right to organize. The police attacked, and eight died.

On July 6, 1892, in Homestead, Pennsylvania, 3800 workers went on strike, to win the right to organize. Three hundred hired and armed goons attacked them. Five people died.

On April 20, 1914, in Ludlow, Colorado, 1200 coal miners went on strike, to win the right to organize. The Colorado National Guard attacked their shantytown, and burned it to the ground. Nineteen people died. Two women and 11 children were asphyxiated, and they burned to death.

Here and around the world, many people have fought and died, so that you and I would have the right to organize.

And so that 250,000 public workers in Wisconsin would have that right, too.

This is not exactly a new idea. Six months after the Ludlow Massacre, President Wilson signed the Clayton Act, prohibiting the prosecution of union members under Antitrust Law. That was almost a century ago.

Two decades later, during the Franklin Roosevelt’s first term as President, he signed the National Labor Relations Act into law. It protects the right to organize. That was over 75 years ago.

The right to organize also is a fundamental principle of international law. Over 150 countries have ratified the “Right to Organize” Convention, an international treaty. It was adopted in 1949, over 60 years ago.

So why are we even talking about this, 11 years into the 21st Century?

Because the teabaggers want to “take back America.” They want to take it back, all right – take it all the way back to the 19th century. When there was no right to organize. When people worked for a dollar a day. When grown men competed against children for jobs. When women were barred from most jobs entirely. When you worked until you died.

Not to mention slavery.

I want to see an America that is healthy and wealthy.

They want an America that provides cheap labor to our corporate overlords. An America where the middle class is chained by debt.

We didn’t ask for this fight. But we have no choice except to fight back. For the survival of the middle class in America. For us, for our children, and for our grandchildren. And so that the victims in Haymarket, in Homestead and in Ludlow did not die in vain.

As Cardinal Spellman said 45 years ago, “it is a war thrust upon us, and we cannot yield to tyranny.”

I’m ready to fight for what’s right. What about you?

Paid for and Authorized by the Committee to Elect Alan Grayson

Run here for free because I Support Alan Grayson

Posted in Uncategorized. Comments Off on Draft Alan Grayson to run against Obama in the Primaries

Facts, Scmacts: Welcome to the New Age of Unreason

The real fact is Republicans hate America and the working people of America.  they are trying to kill anything that benefits the hard working American people so they can give the money to the idle rich.

In the movie “Gangs of New York” Boss Tweed said something to the effect that he could hire half the poor to kill the other half.

The real reason behind misogyny, homophobia, transphobia, racism and ethnic hatred is to divide the middle and working classes so the modern day Boss Tweeds who serve the interests of the rich can use those who chug the Kool-Aid to oppress those who resist the exploitation by the corporations.

Class war, not just for the rich anymore..

Published on Saturday, March 12, 2011 by CommonDreams.org

How the hell did this happen?

Thirty-five and two hundred years ago, our Founders established a nation and Constitution based on the Enlightenment conviction that science and reason was the ultimate basis for legitimacy and authority.

Now we’ve tossed aside the Age of Reason, and we’re plotting our course based on myths, irrational biases, blind faith, and for all I can tell, the random tossing of chicken bones.

A collection of Plutocratic high priests have successfully ended the Age of Reason, replacing it with the Age of Unreason, in which power and wealth are the source of legitimacy, and science and reason are scorned as “elitist.”

Catch the irony in this – a collection of the nation’s economic elite are labeling the essentially democratizing forces of knowledge and reason as “elitist,” and Americans are buying it.

It’s as if we put pyromaniacs in charge of the fire department and declared it good.

As a result, we are getting “eye-of-Newt” solutions to real world problems.

Look at the debate over our budget.

Republicans have been pushing deficit reduction like a dealer pushes smack, and Democrats, addicted to compromise, are buying it like it was the last fix in town, abandoning all thought of an aggressive stimulus package and gutting programs they once endorsed.

Yet we know that stimulus spending created more than 3 million jobs, and we know that cutting spending during an economic downturn is disastrous.

For example, in 1937, when Roosevelt’s extensive public works investments had restored wages, profits, and production to pre-Depression levels and lowered unemployment, Roosevelt was convinced to tackle the deficit by cutting government spending. The result? Unemployment jumped from 14.3% in 1937 to 19.0% in 1938, rising from 5 million to more than 12 million in early 1938. Manufacturing output fell by 37% from the 1937 peak.

Posted in Uncategorized. Comments Off on Facts, Scmacts: Welcome to the New Age of Unreason

March 12, 2011 — Suzan
FOR IMMEDIATE RELEASE
For Further Information, Contact:
Daniel Graney at 210-494-7442 or
dcgraney@yahoo.comThis e-mail address is being protected from spambots. You need JavaScript enabled to view it

Members of the Texas Stonewall Democratic Caucus (TSDC) from all across the state met in Austin on March 5 and 6 to assess the “ass-whipping” Democrats took at the polls last November and to develop messaging and other strategies for winning in 2012. Participants heard two powerful keynote speeches from openly bisexual Arizona State Senator Kyrsten Sinema and national transgender activist Mara Keisling.

In her speech, Sinema illuminated how Arizona is the breeding ground for all the anti-immigrant, anti-choice, anti-worker’s rights and anti-children’s health care legislation that is being proposed in many state legislatures, including Texas. She warned that “Arizona is coming to a state near you” and characterized this as an attempt by the so-called Tea Party to “mainstream hatred in this country”. She stated that the Tea Party has been around for 20 years and is just another name for Republicans. Sinema outlined ways that Democrats can build coalitions to stop these bad bills from becoming law and encouraged LGBT Democrats to reach out to allies, even unlikely ones, and support their issues in exchange for their support of ours. “After all, LGBT people make up only 4% of the electorate and you need 50% plus one to win,” she said. After her speech, attendees jumped to their feet to give Sinema a rousing ovation and then formed a line to have her autograph copies of her book, “Unite And Conquer: Building Coalitions That Win – And Last”.

Keisling used a combination of her expertise and humor to urge LGBT Democrats to move outside their “issue silos” and talk about racism, immigration and other issues in our conversations with others. She jokingly spoke of her prior “husbands”, George W. Bush and Rick Perry, and referred to the Tea Party as a reincarnation of the John Birch Society. When asked about the prospects of passage of the federal Employment Non-Discrimination Act, or ENDA, Keisling flatly replied that it was dead for the next two years, given the Republican majority in the U.S. House. She concluded her presentation by doing a “tap dance routine” with her mouth and tongue, which evoked laughter and applause.

Awards were presented to Houston LGBT activist Brad Pritchett, Stonewall Democrats of the Rio Grande Valley and State Senator Wendy Davis (D-Fort Worth). The conference also included a TSDC Executive Board meeting and workshops on a variety of topics such as building a bigger club and youth involvement and use of social media.

The conference was timed to occur on the weekend before Equality Texas Lobby Day and many who attended the conference joined hundreds of other lesbian, gay, bisexual, transgender (LGBT) Texans and their straight allies on Monday, March 7, at the State Capitol to speak to state legislators about anti-bullying and other bills important to the LGBT community.

TSDC officers reported that a total of 70 LGBT Democrats and straight allies from across the state registered for the conference. There was representation at the conference from all nine active chapters statewide, including many young people, as well as from Galveston and Tyler.

“Many who attended the conference thanked me for this experience”, said TSDC President Dan Graney, “and that they were leaving energized to carry on the important work of Stonewall Democrats back home”.

For more information about the conference, visit www.texasstonewalldemocrats.org.

Posted in Uncategorized. Comments Off on TEXAS STONEWALL DEMOCRATS MEET IN AUSTIN